Live tweeting for me has been a unique but challenging experience commenting on varies different sci fi films really gave my a new found appreciation of the creativity and thought these directors and writers had when depicting themes of the future and technology, some outlandish and others seemed worrinly accurate, seeing a rapidly expanding chain of ideas and comments about a film was almost a surreal experience, as classmates commented a explained their views on different scenes through each movie you begin to get a glimpse of a person’s train of thought in real time.

In week 6 due the cost of Blade runner 2046, i had to comment on the film interstellar, i found the movie really captivating, especially with an introduction that took no time in bringing the viewer start into the actually without proper introductions, my tweeting however did not get any attention, likely because i was doing another movie that my other classmates didn’t have much context on, however i did get a few likes and retweet on my first tweet about the movie (below) which was a welcome surprise.

In week 7 i had to use a new twitter account as In had lost my old one temporarily, unfortunately i forget to follow people so m work could be seen, i did however manage to write what i think were some of my best tweets about my favourite movie of the semester, I particularly like my last tweet at the end as i broke away from usual content about movie facts, trivia and reviews by others to give my own thoughts on the movie and ask a question that was intended for viewers to first analyse their own interpretation of the movies themes before think up an answer. 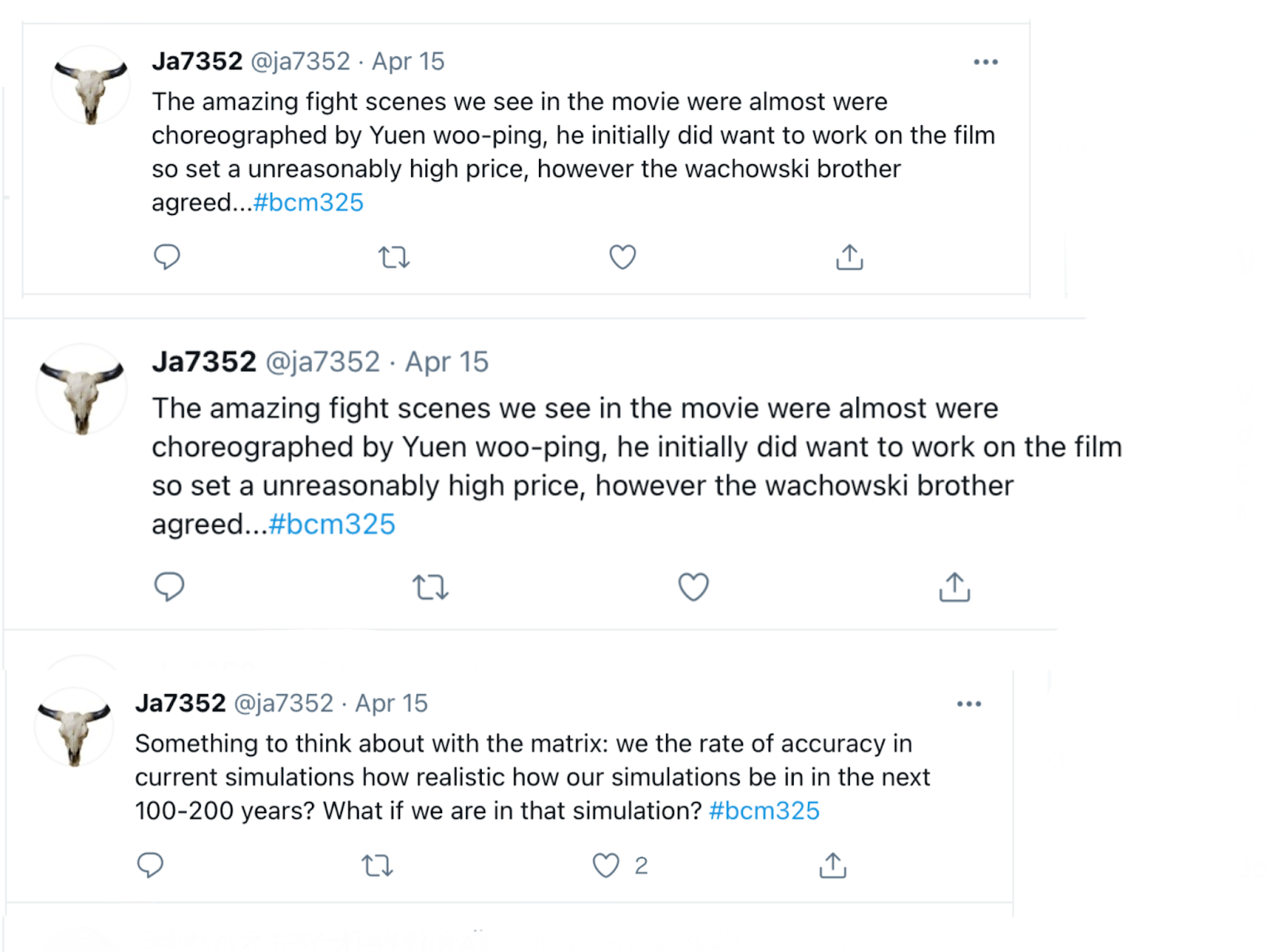 After missing the film Alita battle Alita Battle angel I rejoined on week 10’s screening of Ready player one, I this week i focused on retweeted and more people content, instead of waiting for tweets to appear on my feed i checked the bsm325# hashtag for other people who I wasn’t following. I also made two posts with photos in them, (one is down below) this post got three likes, which for me was quite high, by putting photos along with text, I believe others saw the tweets more engaging and visually appealing, gaining more attention. In my last week (week 11) we looked at the fil robot and frank. I continued to post tweets with photos in them and retweet and like other peoples work by searching the hashtag. I noticed in the previous week i mostly had facts and trivia about the movie, so I wanted to include more factual/opinion pieces in my tweets in the hopes that it would be more engaging. 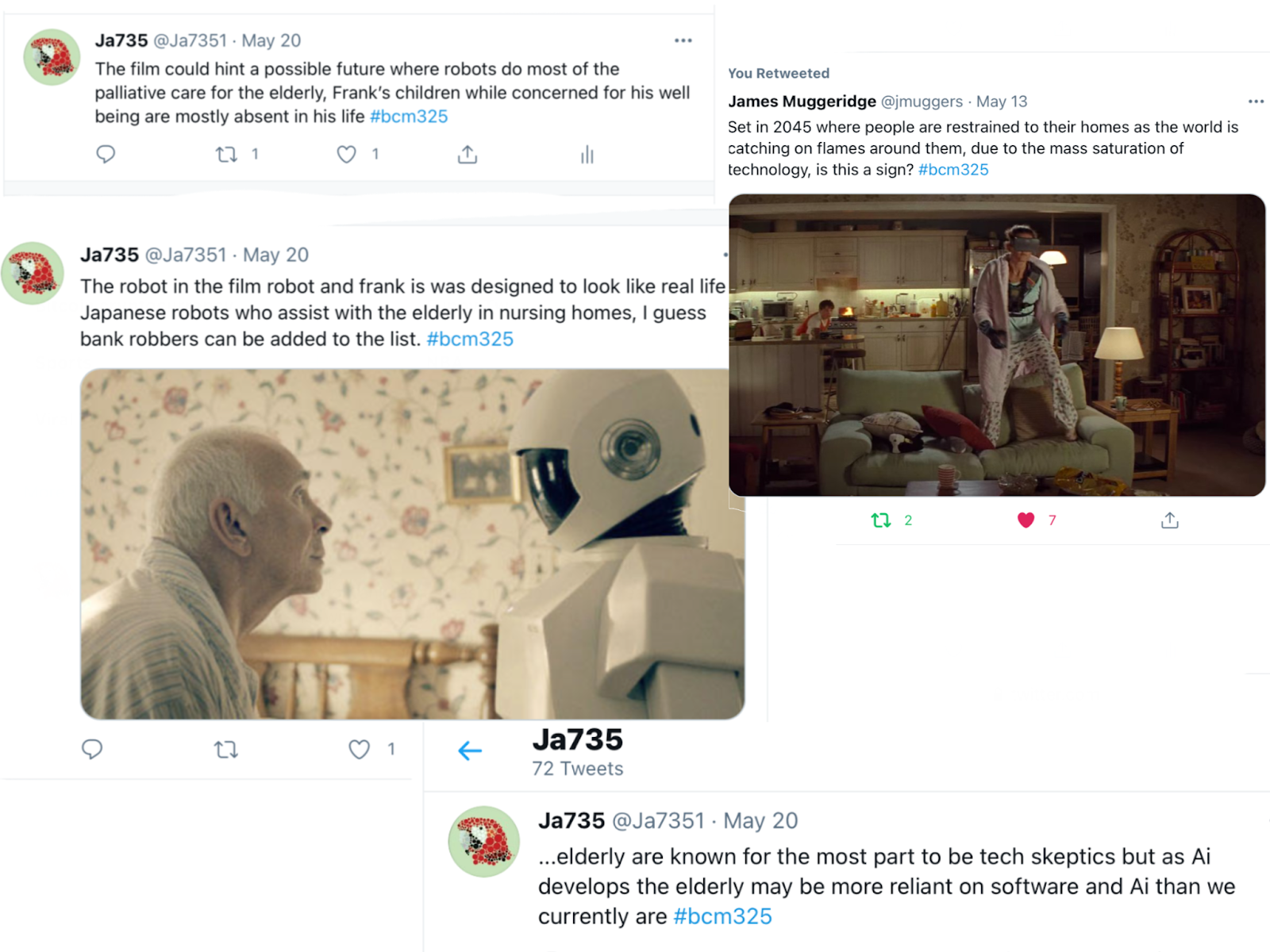 There are definitely things in would have done differently if i had a second go at live tweeting, id firstly put more opinion pieces in my tweets, many of the peers of follwed mostly put trivia and facts about each movie and I went along with this in the hopes that i would get a similar response as them, this however did not work, there actually were a few times i posted the same information as someone else, only to discover this later and realise why the posts did not get any attention.

My second biggest problem was not following as many people as I could, beside a couple people i had followed at the initial start of the screenings I had not followed anyone else, this could be due to my feeling inadequacy in the content I was online, where the goal would be to get attention, criticism and discussion, another reason could have been something i noticed in my last live tweeting blog that still persisted through these last weeks as well, I would come across a tweet every once through the duration of each movie that had a huge number of likes and retweets, while there subsequent tweets did not receive nearly as many, this phenomena seemed to happen separately and didn’t seem to have any linking reason as to why certain tweets get such a large response, in my opinion this was a example of herd mentality, because of this many tweets were dwarfed by these kind of high response tweets and in turn made successful tweets look more like a matter chance than number of followers.

Overall i did enjoy most of the movies i watched and found some f the information i found surprising. I hope that going forward i gain more confidence in my own capabilities of tweeting and live content sharing.